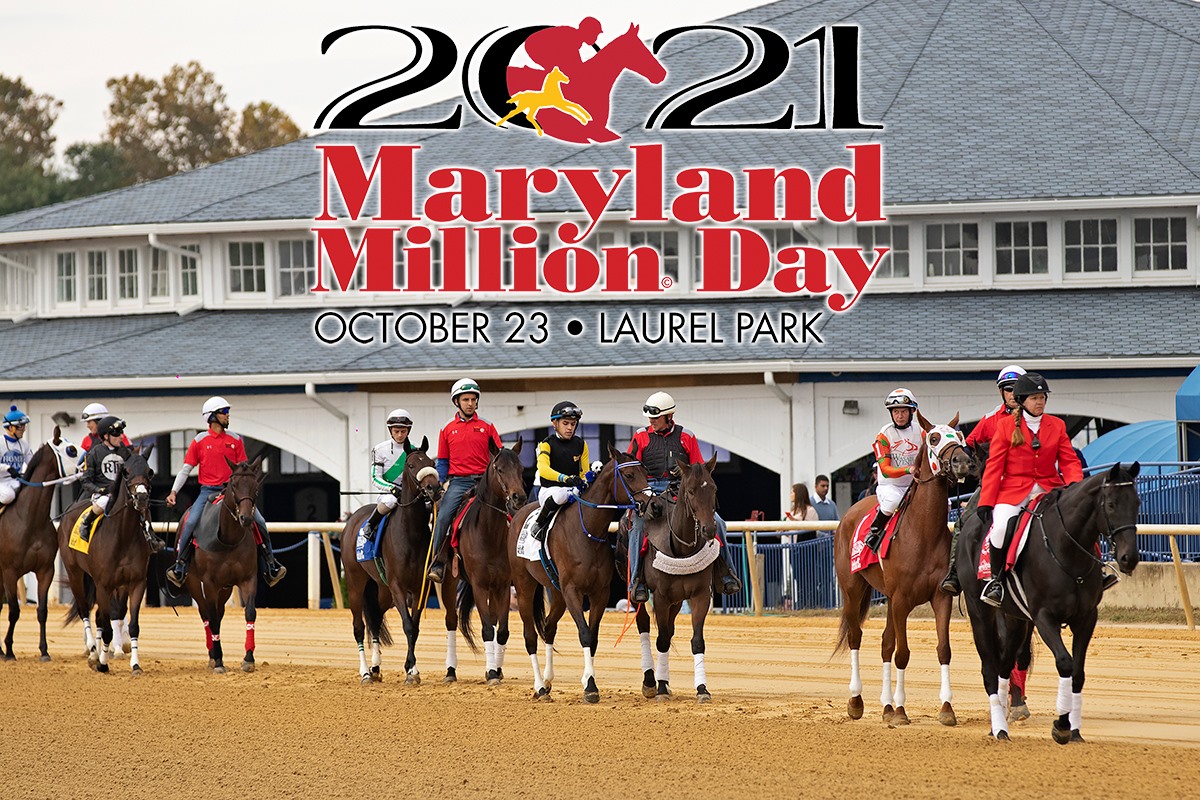 Five of the races on the groundbreaking Maryland Million program are scheduled to be contested over Laurel’s world-class turf course. Entries will be taken and post positions drawn Wednesday, Oct. 20.

Cordmaker and Galerio are each among 23 horses nominated to the $150,000 Classic, the richest race on the Maryland Million program, for 3-year-olds and up going 1 1/8 miles. Hillwood Stables’ Cordmaker, a 6-year-old son of two-time Horse of the Year 2014 Hall of Famer Curlin, owns six career stakes wins, four of them coming at Laurel, and was third in the historic Pimlico Special (G3) in both 2019 and 2020.

Galerio is owned and trained by Jamie Ness, who claimed the 5-year-old Jump Start gelding out of a runner-up finish Aug. 16 at Colonial Downs. Overall, the Maryland-bred has been first or second in 22 of 28 lifetime starts, nine of them wins, and has placed in five stakes including a second to Cordmaker in the March 13 Harrison Johnson Memorial at Laurel and third in the June 12 Salvator Mile (G3) at Monmouth Park.

Also pre-entered in the Classic are multiple stakes winners Alwaysmining, who ran in the 2019 Preakness (G1); 5-year-old mare Artful Splatter, beaten a head when second in the Sept. 18 Twixt at Laurel; and 2019 Classic runner-up Prendimi, as well as Non Stop Stable’s Tappin Cat, third in the 2019 Classic and currently riding a three-race win streak for Laurel trainer Gary Capuano.

Madaket Stables, Albert Frassetto, Mark Parkinson, K-Mac Stables and Magic City Stables’ Hello Beautiful is pre-entered to defend her title in the $100,000 Distaff for fillies and mares 3 and up sprinting seven furlongs. The 4-year-old daughter of Golden Lad, winner of the 2019 Maryland Million Lassie, is 9-for-17 overall and 3-for-5 this year, each win coming in stakes, including the Alma North and Weathervane in back-to-back starts, the latter her most recent Sept. 18 at Laurel.

Lucky 7 Stables’ 3-year-old Street Lute is an eight-time stakes winner who has faced her elders twice before, including a victory over stakes winner and fellow Distaff pre-entrant Malibu Beauty in the Sept. 25 Tax Free District at Delaware Park. Also pre-entered are Coconut Cake and multiple-stakes winner Never Enough Time, respectively second and third in the Weathervane; Kiss the Girl, winner of the Aug. 21 All Brandy at historic Pimlico Race Course; and 3-year-old Moquist, undefeated in her only two starts, both this year.

Another defending champion pre-entered in 2021 is Nancy Heil-bred, owned and trained Karan’s Notion in the $100,000 Sprint for 3-year-old and up at six furlongs. Karan’s Notion was a front-running winner of last year’s Sprint by a length at odds of 16-1 and was third in the six-furlong Not For Love March 13 at Laurel in his most recent stakes attempt.

Also prominent among 22 Sprint pre-entries are Reeves Thoroughbred Racing’s Double Crown, a two-time stakes winner that in 2020 ran second in the Chick Lang (G3) at Pimlico and third in the Smile Sprint (G3) at Gulfstream Park; multiple stakes winners Jaxon Traveler, Kenny Had a Notion, Street Lute and Whereshetoldmetogo; and stakes winner Exculpatory.

The $100,000 Turf Sprint for 3-year-olds and up going 5 ½ furlongs returned to the Maryland Million in 2020 after an eight-year absence and was won by the talented Fiya. The second through sixth-place finishers from that race – respectively So Street, Godlovesasinner, Grateful Bred, Love You Much and Joseph – are among 24 pre-entries in 2021 along with stakes winners Can the Queen, Introduced and Kenny Had a Notion.

Lead Off Stable’s Pretty Good Year pulled off a 15-1 upset of last year’s $100,000 Turf for 3-year-olds and up at 1 1/8 miles, but has gone winless in six subsequent starts, including two at Saratoga this summer. Among the 23 pre-entrants this year are stakes winners Trifor Gold and Somekindofmagician as well as 2020 Turf runner-up Cannon’s Roar. Taking Risks Stable’s Cannon’s Roar has run in the past three Maryland Millions, finishing seventh in the 2019 Turf and fourth in the 2018 Turf Starter Handicap. His trainer, Dale Capuano, owns the most wins in Maryland Million history with 14.

The Turf’s companion race, the $100,000 Maryland Million Ladies going 1 1/8 miles on grass for fillies and mares 3 and older, attracted 23 pre-entrants led by Vivian Rall’s homebred Epic Idea who finished first by three-quarters of a length in 2020 but in May was disqualified to second following a Maryland Racing Commission ruling on the appeal of Dale Capuano, trainer of runner-up Gennie Highway, who was subsequently placed first. Kiss the Girl, a stakes winner on both turf and dirt, and Mike Trombetta-trained stablemate No Mo Lady, third in the 2020 Gallorette (G3) at Pimlico, are also among the 23 pre-entries.

Most popular among horsemen was the $100,000 Nursery for 2-year-olds, which drew 28 pre-entries led by Bonuccelli Racing’s Cynergy’s Star, winner of the Aug. 29 Timonium Juvenile in his most recent start, and Bird Mobberley’s Local Motive, winner of the Hickory Tree on the Colonial Downs turf Aug. 2. The $100,000 Lassie saw 21 2-year-old fillies pre-entered including Waterworks, trained by Hall of Famer Steve Asmussen and exiting a 9 ¼-length maiden special weight triumph Sept. 10 at Monmouth; stakes-placed Mama G’s Wish; and Jester Calls Nojoy, sixth last out in the Frizette (G1) Oct. 3 at Belmont Park for Hall of Fame trainer Todd Pletcher.

Dale Capuano and Hall of Famer King Leatherbury, who together have combined for more than 10,000 career victories, rank 1-2 among Maryland Million trainers with 14 and 10 wins, respectively, while Trombetta moved into third last year with his ninth win.

Named for the late Hall of Fame and 13-time Emmy Award-winning broadcaster who helped launch the groundbreaking concept in 1986, the Jim McKay Maryland Million has evolved into the second-biggest day on the state’s racing calendar behind only the Preakness Stakes (G1). ‘Maryland’s Day at the Races’ celebrates the stallions who stand in the state as well as a rich and diverse racing history that dates back to the founding of the Maryland Jockey Club in 1743.

View the pre-entries and pre-entry PPs