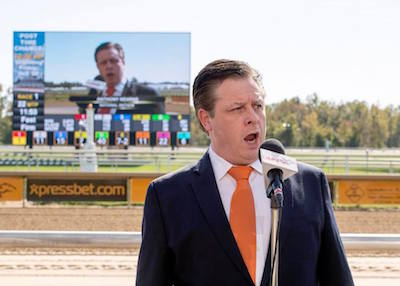 BALTIMORE - World-renowned tenor Anthony Kearns will sing the National Anthem and “God Bless America” at the 2018 Jim McKay Maryland Million Day at Laurel Park on Saturday, October 20, 2018, it was announced.

This is the fourth year Kearns will sing at this extraordinary day of racing for Maryland-sired Thoroughbred horses, started in 1986. The Jim McKay Maryland Million Day is a one-day stakes program offering purses and awards of more than $1 million, and is second only to the Preakness Stakes in Maryland racing events.

Mr. Kearns, who also sang at the 141st Preakness Stakes in 2016 and Pegasus World Cup Invitational in 2018 said his appearance at the Jim McKay Maryland Million celebrations combines two of his greatest passions: music and horses.

Kearns hails from County Wexford, Ireland – home of many internationally-known trainers such as Jim Bolger and Aidan O’Brien, and many great horse breeders, trainers and jockeys.

Now living in the U.S., Mr. Kearns said there are strong ties between the Irish and Americans in horse racing circles and he is proud to support the international racing community on both sides of the Atlantic.

“Every time Anthony Kearns returns to Laurel Park for a brilliant showcase of the best of Maryland Thoroughbreds, his voice adds a touch of excellence to the hallmark of what we see on Jim McKay Maryland Million Day,” said John McDaniel, former member and Chairman of the Maryland Racing Commission, and owner of Hickory Ridge Farm in Howard County.

During a ticketed pre-race gala on Friday, October 19, Kearns will perform a selection of classical, popular and inspirational songs, as well as serve as a celebrity guest host during the live auction benefiting the Maryland Horse Industry Foundation.

Kearns took the American television audience by storm in 1999 as the youngest member of the wildly popular musical group, The Irish Tenors with whom he has 10 CDs and five PBS specials. Their CDs have gone Gold, Platinum and Double Platinum. American critics hailed Kearns as perhaps the most likely of the three (Irish Tenors) to “achieve the level of tenor super stardom enjoyed by Pavarotti and a handful of other singers.” Next year, The Irish Tenors will mark their 20th anniversary with a whirlwind concert tour beginning in Ireland in January 2019.

Mr. Kearns has had the privilege to sing for four U.S. Presidents, the chairman of the Joint Chiefs of Staff and Medal of Honor recipients, and at the Pre-Mass concert in Philadelphia for Pope Francis. He also sang at the National Memorial Day Concert on PBS and opened the National Memorial Day Parade in Washington, D.C. – the largest in the nation -- before a national television audience.

Mr. Kearns’ appearance was arranged by Kirsten Fedewa & Associates, L.L.C. For more information, contact: Kirsten Fedewa (on behalf of Anthony Kearns): 202.365.6936 / This email address is being protected from spambots. You need JavaScript enabled to view it..