We're getting closer to this year's renewal of the Jim McKay Maryland Million, which will take place on Saturday, October 22. The always-popular Club Tent tables are now on sale!

In case you missed it - here's the Country Life Farm Virtual Stallion Show video. Special thanks to Maryland Thoroughbred for the stallion videography, by Thad Kesten from Hammon Productions in Lexington, KY, and Ellen Pons for shooting the commentary video and putting it all together.

The dynamic stallions standing at Northview Stallion Station in Chesapeake City will be available for inspection during an Open House on Sunday, January 30, from 11:30 a.m. to 2:00 p.m. Get a first look at exciting new arrivals ENGAGE and GALAWI (IRE), who join a roster that offers leading regional sires, hot 2-year-old sires and tremendous value on the dollar!

ENGAGE offers pure speed and a direct line to the nation’s three-time leading sire Into Mischief. A graded stakes at 2 and 4, ENGAGE captured Keeneland’s Grade 2 Stoll Keenon Ogden Phoenix, a Breeders’ Cup “Win and You’re In” event for the 2019 Breeders’ Cup Sprint, over a field that included eventual Eclipse Award-winning sprinter Whitmore and Grade 1 winners Lexitonian, Hog Creek Hustle and Promises Fulfilled. The first true sprinter to retire to Northview in years, ENGAGE represents the highly successful pedigree cross of Into Mischief with Speightstown mares – the same cross that has produced Grade 1-winning sprinters Mia Mischief and Mischevious Alex, and Grade 1-placed Make Mischief from 14 foals to race.

GALAWI (IRE) offers a peerless world-class pedigree as a son of the world’s most successful international sire, Dubawi (Ire) – whose more than 225 stakes winners include three 2021 Breeders’ Cup winners – out of a Group 1-winning millionaire half-sister to the incomparable Goldikova (Ire). A stakes-caliber runner who was retired early due to injury, GALAWI (IRE) descends from generations of champions and Group 1 winners from the marvelously successful French stud nurtured by Jacques Wertheimer, and in recent decades by his sons. GALAWI (IRE) ’s female line leads directly to Prix de l’Arc de Triomphe winner Gold River (Fr).

GREAT NOTION tops all Maryland stallions by progeny earnings for the fourth consecutive year, and outdistances the state’s 2021 sires by number of black-type winners and black-type runners. Maryland’s five-time Stallion of the Year is well on his way to add another title to his list of accomplishments.

With just three crops to race, GOLDEN LAD ranks second on Maryland’s leading sires lists. His daughter Hello Beautiful became a three-time Maryland Million winner while pushing her earnings to nearly $600,000, and he was one of three Northview stallions to sire two winners on the 2021 Maryland Million card (joining Great Notion and the late Buffum) when his son Air Token took the Sprint.

Second-crop sire UNCLE LINO has the highest average earnings per runner of all the region’s stallions with oldest runners now 3, and has seven stakes performers.

Freshman sire MADEFROMLUCKY, the millionaire son of champion Lookin At Lucky, got a stakes winner out of the gate, when Epic Luck won at Colonial Downs over the summer!

HOPPERTUNITY, the richest horse to enter stud in the region after a career in which he counted 19 graded stakes wins or placings and more than $4.7 million in earnings and retired sound, has first-crop yearlings selling on average for five times his stud fee.

IRISH WAR CRY, a top-class racehorse with great presence, beautiful balance and an impressive physique by the mighty Curlin, is the sire of two large crops in his first two years at stud. An undefeated 2-year-old who won stakes at 3 and 4, he has first runners coming to the races in 2022.

Moved to Northview for the 2021 season, ECLIPTICALSPRALINE is from the immediate family champion Cascapedia and has the same A++ Ecliptical/Tri Jet cross as stakes winner Exclusive Rosette, the second dam of American Pharoah.

With the breeding season fast approaching, Northview offers the perfect opportunity to get mating plans underway. Light fare and refreshments will be available. 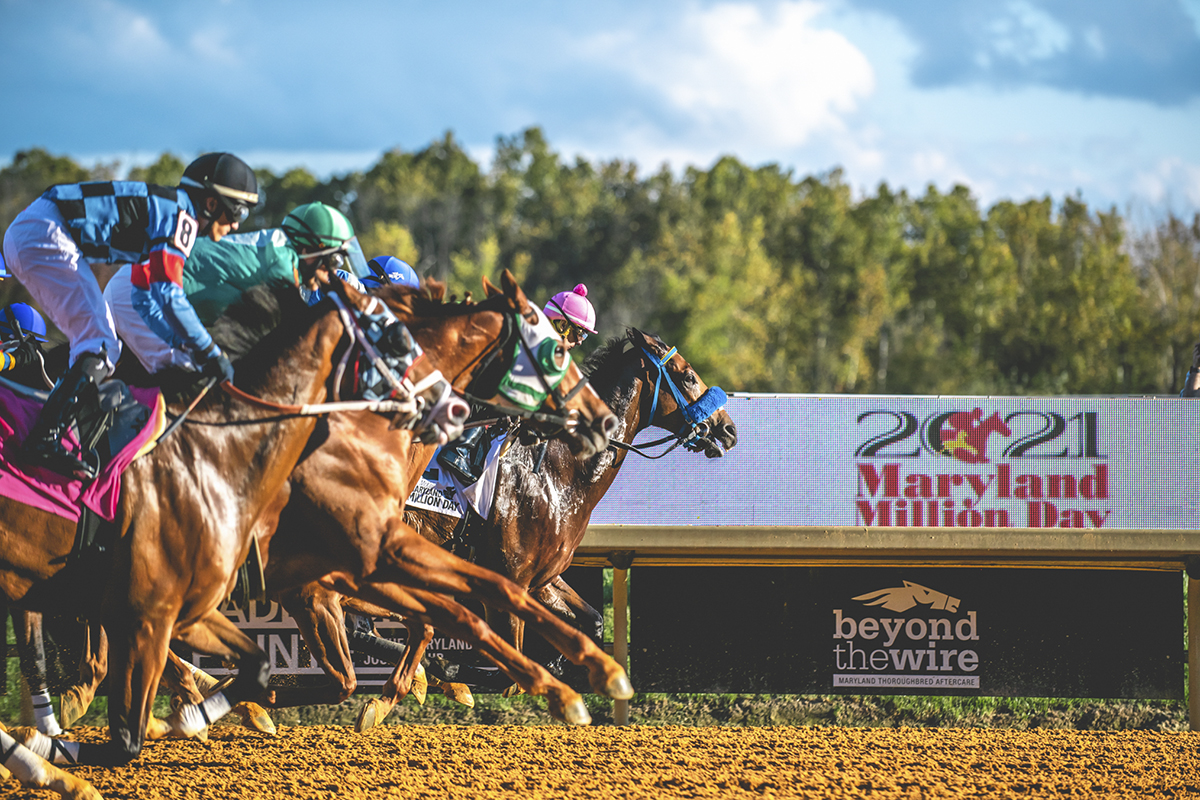 “We as an industry have been through a lot but we also have a lot to look forward to. Maryland has continuously worked to bring a new wave of quality stallions into the state and that effort would not be possible without the breeders and horsemen who support them,” said Louis Merryman, president of Maryland Million Ltd. and owner of Anchor & Hope Farm in Port Deposit, Md. “Maryland Million day serves as a showcase for our farms and the horsemen that work so hard.”

The 2021 running of Maryland’s Day at the Races marked a return to relative normalcy, after the previous year’s event was run under COVID-19 restrictions, which limited spectator attendance. Enthusiastic participation by horsemen resulted in full fields and a handle figure over $6.5 million, and the always popular Maryland Million Hospitality Village was full and sponsor participation made an impressive rebound from 2020.

“We are looking forward to an even better event in 2022, with more fans and more fun” said Cricket Goodall, executive director, “And we are proud that Jim McKay Maryland Million Day caps off Maryland Horse Month in October that celebrates all of the diverse horse activities we have here”.